A build systems is a functional program or scripts developed to automate and simplify compiling and linking source code.  A meta-build system like CMake  generates native makefiles and workspaces that can be used in the compiler environment of your choice. CMake is a powerful open-source cross-platform set of tools designed to build, test and package software. ROS build systems are built on top of CMake and have evolved over the years to simplify software development in robotics.

The motivation for this article is an error encountered while attempting to build a workspace containing both catkin and rosbuild packages. The figure below shows the orocos_kdl package is plain cmake (it contains a manifest.xml file) thus it cannot be built using catkin_make. The suggestion is to use catkin_make_isolated instead.

This article reviews build systems in the order they have been used within the ROS ecosystem, ending with colcon which is currently the latest ROS build system.

rosbuild is a set of scripts for managing the CMake based build system for use with ROS. The CMake wrapper script (rosmake) is what builds ROS. Most commonly used ROS packages have been updated to use the recommended catkin build system. If a ROS package contains a manifest.xml file, then it uses the rosbuild system. This file contains useful information such as the cpp cflags and a list of dependencies.

Most ROS users are comfortable using catkin_make to build ROS workspaces since this is the command used in most tutorials. catkin_make is a convenient way to evoke calls to cmake and make in the standard CMake workflow. The entire workspace is treated as a single CMake project which makes incremental builds faster but it is slow if build files need to be regenerated.

Limitations of catkin_make include not being able to process plain CMake packages and requiring all targets (across all packages in a workspace) to be unique. An error in a leaf package (without dependencies) will also prevent all packages from configuring.

ROS packages that use the catkin build system will contain a package.xml file.

To build a workspace using catkin_make follow these steps:

catkin_make_isolated improves on catkin_make by building isolated workspaces (each software package is independently configured, built and installed into its own directory) instead of a merged workspace (every software package is installed into the same directory). The install artifacts of a single package can therefore be removed by simply deleting its directory. Since each package is treated as a separate CMake project, catkin_make_isolated processes all packages in the workspace sequentially and installs each package separately according to the dependency order. This decoupling of dependencies allows catkin_make_isolated to build plain CMake packages, build packages without re-configuring dependencies, and to build part of a workspace.

The improvements made by catkin_make_isolated come at a cost of speed however. This is because the building of targets and packages without co-dependencies is not parallelised.

To build a workspace using catkin_make_isolated, follow these steps:

catkin_tools is similar to catkin_make_isolated with the exception that packages are built in topological order and in parallel where possible, resulting in improved build times. Each package is treated as a separate CMake project and built separately. Common build errors are caught by utilising persistent build metadata. When running catkin build, a status line is displayed for all packages and a build summary is shown at the end which also shows any abandoned jobs (due to failed dependencies). The supported catkin_tools command line verbs are:

catkin_tools is not included in the ROS full desktop installation. To install it run sudo apt-get install ros-noetic-catkin python3-catkin-tools in terminal.

Running the catkin build --dry-run command from the workspace described at the start of this article produces the output shown in the figure below (note how a workspace containing both cmake and catkin packages is supported). 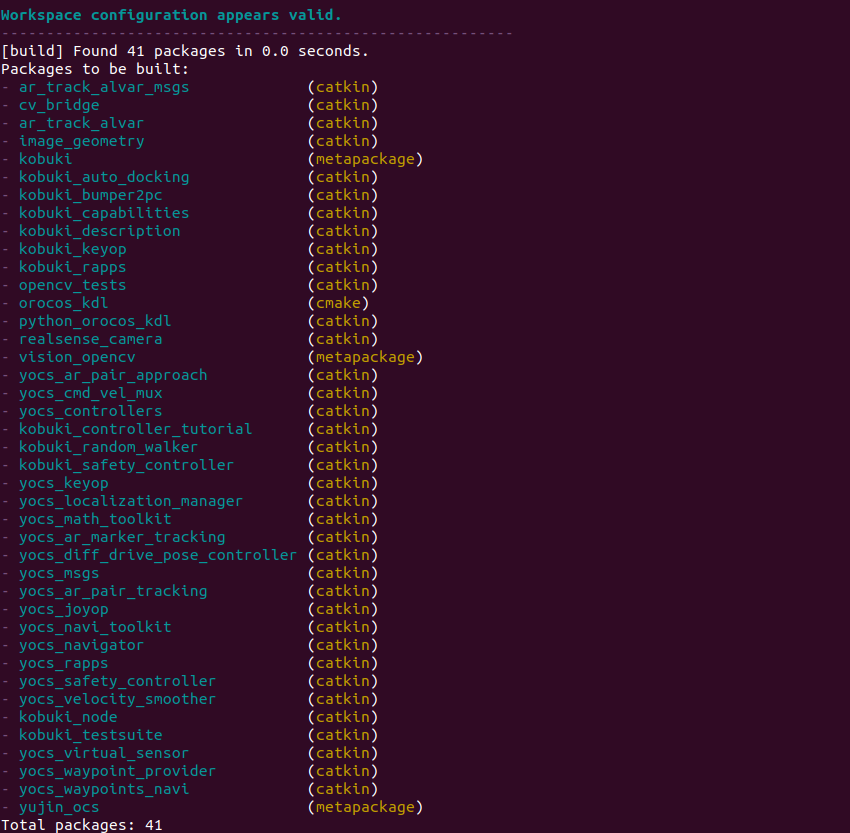 To build a workspace using catkin build follow these steps:

When using ROS 1, the recommended build system is catkin_tools (which was used to fix the error shown at the beginning of this article). A brief history of catkin provides a good overview of ROS build systems.

colcon is a command line tool for building, testing and using multiple software packages.  It is the latest ROS build tool which can build different types of packages (CMake, Python setuptools, cargo, gradle etc.) on different operating systems. It is under active development for ROS 2 and also supports building ROS 1 workspaces.

To build a workspace using colcon follow these steps:

Several extensions that enable colcon to support build systems other than CMake are available. One example is colcon-bazel which extends colcon-core to support Bazel projects.

A overview of implementing a Bazel workspace for ROS 2, without breaking colcon support, can be found in Funk’s ROSCon2022 talk and slides. The motivation for this application was building large scale ROS 2 safety critical applications.